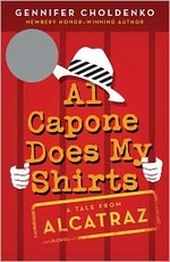 Al Capone Does My Shirts by Gennifer Choldenko

Al Capone was one of the most notorious gangsters of the 20th century.  He was sent to Alcatraz Prison, which was on an island in the middle of San Francisco Bay.  While he was in prison, one of his jobs was to do the laundry for the families of the prison guards (who all lived on the island.)

Moose's father has just been transferred to Alcatraz and Moose couldn't be more miserable.  He misses his friends and has difficulty making new ones--the other students think he's "weird" because he lives on Alcatraz.  Moose gets the bright idea to charge students to give them their clothes for him to send to the prison laundry--that's where the book gets its name from!

I really enjoyed this book.  I've visited Alcatraz twice and found it fascinating.  It was interesting to see what life was like on the island through Moose's perspective, rather than a prisoner's.  Check this book out for an entertaining story!
Powered by